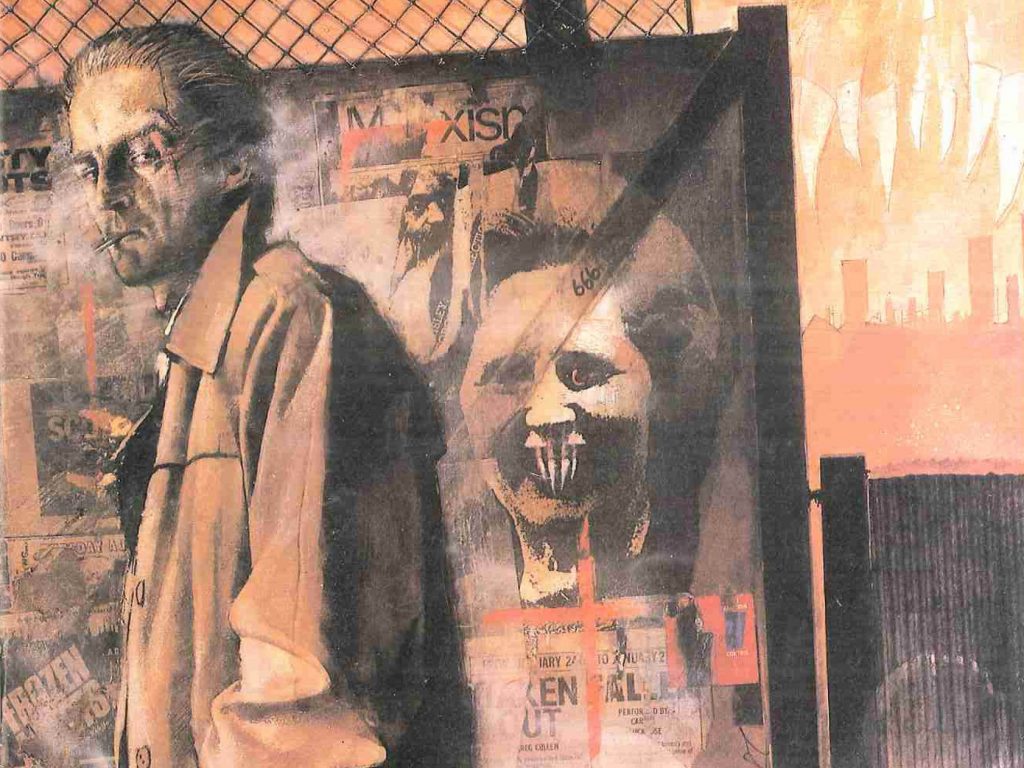 Things get a little episodic and a lot creepy in Hellblazer #3-5. Join us as Constantine makes it to the polls, solves a family emergency, and faces the most terrifying prospect of all: a trip to the States!

2:28 – The name “Mammon” originates from our old friend the Vulgate Bible, in which it is derived from the Latin “mammona,” meaning literally, “wealth.” The book of Matthew famously states that one cannot serve both God and mammon. The word had begun to be used as the name of a literary demon by the 12th century, though the usage likely received much more of its present popularity from Edmund Spenser’s The Faerie Queene.

2:38 – According to its Image Comics page, The Black Monday Murders is “classic occultism where the various schools of magic are actually clandestine banking cartels who control all of society.” Sounds like economic commentary mixed with urban horror, not unlike this issue.

3:58 – This is pretty essential background, so: Margaret Thatcher was Prime Minister of Great Britain from 1979 to 1990. Representing the Conservative Party, she was unpopular with the working class (and with comics writers!), especially when the Conservatives’ platform for the 1987 election (the one depicted in this issue) included replacing property tax with a flat per-person tax. Thatcherism – and its unpopularity with British artists – were  hugely influential on British comics of the 80s; V for Vendetta might be the most famous (and most famously hostile) comics response.

4:45 – Keith David – whose voice you might know better than his face as Mass Effect’s Admiral Anderson and Gargoyles’ Goliath, among many others – is one of my favorite actors.

5:14 – They Live! is a counterculture classic (and the origin of the line, “I have come here to chew bubble gum and kick ass,” etc., ad-libbed by Piper in the aforementioned bank scene), but I can’t blame you if you just want to check out the iconic fight scene.

8:08 – I was immediately reminded of the hilariously vile fast food scene from the movie Dylan Dog: Dead of Night.

23:21 – Though you might infer it from the strange circumstances of her introduction, we failed to mention in the audio that this is the first appearance of Mary “Zed” Martin.

24:45 – As the issue will reveal a few pages later, Gemma is ten years old in this story.

33:34 – Dennis Wheatley wrote a number of occult thriller novels from 1934 to 1970. Perhaps the most famous was The Devil Rides Out, which was adapted into a Hammer horror movie: The Devil’s Bride, starring Christopher Lee as the Duke de Richleau. Notably, unlike some occult heroes we know, Richleau had a firm policy against fighting fire with fire when it came to black magic.

36:12 – A cat could have led them through the secret routes to the house, but Sam Kieth wasn’t around to draw it.

43:28 – “When Johnny Comes Marching Home” is a popular American folk song written by Irish-American bandleader Patrick Gilmore during the Civil War. Contrary to popular myth, it is not a rewrite of the similar – but more vocally anti-war – “Johnny We Hardly Knew Ye,” which was first published a few years later in 1867.

1:03:11 – Okay: Platoon is a 1986 film written and directed by Oliver Stone. After this issue was released, Stone would go on to make two more films comprising a loose Vietnam trilogy. Hamburger Hill is a 1987 movie written by James Carabatsos and directed by John Irvin, dramatizing the real battle of the same name, a 10-day series of infantry assaults on a seemingly unimportant hill which was abandoned shortly thereafter. Full Metal Jacket is Stanley Kubrick’s 1987 take on the war, written by Kubrick, Michael Herr, and Gustav Hasford. Focusing for much of its length on U.S. Marine Corps basic training, the film is most famous today for R. Lee Ermey’s performance as the hardass Drill Sergeant Hartman.

1:05:23 – The Falklands War between the U.K. and Argentina was already over by the time of this issue (taking place entirely in 1982), but it was much more recent, and perhaps more of a concern of Delano’s – it will come up in Hellblazer #7. Three TV reporters were embedded in the British task force sent to the Falklands, though low satellite bandwidth and lack of interest meant that TV coverage arrived three weeks late, in a war that lasted only ten weeks.