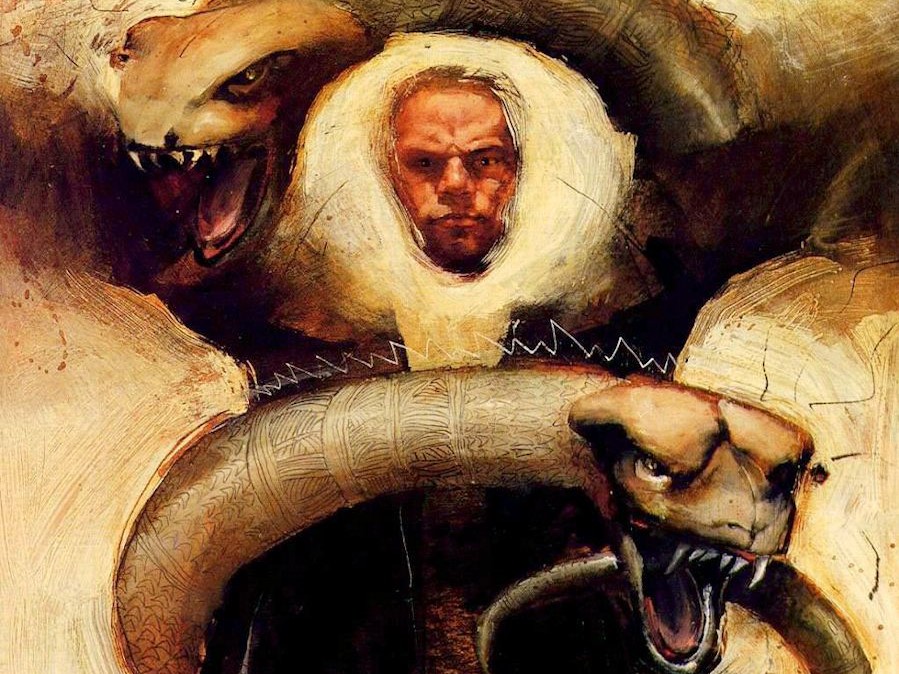 The Vertiguys are back with Hellblazer #20-22, the smashing conclusion of The Fear Machine! Join us as the GOAG is born, Zed turns the tables, and Constantine doesn’t save anybody.

2:28 – This is, of course, a reference to the Red Wedding, a major event in the novel A Storm of Swords and the Song of Ice and Fire book series, later adapted into the Game of Thrones episode “The Rains of Castamere.”

6:42 – Mister Miracle was created by Jack Kirby in 1971 as a part of his Fourth World line. There have been a few different volumes, with the most recent launching as a 12-issue limited series in August of 2017. The series features writing by Tom King and art by Mitch Gerads, the same creative team from Vertigo’s 2015 series The Sheriff of Babylon.

7:37 – In Hellblazer #17, part IV of The Fear Machine, the conspiracy tried using the titular device to eliminate a Russian agent, Sergei, by blasting the passenger train he was riding on. Despite crashing the train and killing a lot of the people onboard, they failed to kill Sergei, who escaped with some help from Constantine. We covered it in our last Hellblazer episode.

14:15 – In Hellblazer #18, also last episode, Mrs. Talbot took her own life with an overdose of painkillers and a razor blade after a months-long campaign of harassment by mail. Note the tightness (or is it randomness?) of the plot: Mrs. Talbot takes pills, Sergei whacks John with a lamp, John goes out for headache pills, John doesn’t get arrested and killed.

14:41 – The Dragon is a TVTropes term for the penultimate bad guy, the toughest enforcer on the payroll of the Big Bad… which is also a TVTropes term.

17:27 – Perhaps Sean is alluding to Alan Moore’s V for Vendetta here. Published in 1988 and 1989, it’s another British comic of the era to feature a totalitarian sect taking control of England. V for Vendetta was originally published in an anthology comic called Warrior, but became a Vertigo comic retroactively when it was released in trade paperback. Keep an eye out for a future Vertiguys special episode!

22:48 – John’s inability to use technology has been a recurring theme, but it’s especially prominent in Hellblazer #7, “Ghosts in the Machine,” covered here.

25:37 – We’re referencing Sandman’s incarnation of Death as a pretty, gothy brunette. Her appearance in that comic was inspired by Cinamon Hadley, who passed away earlier this month after a battle with colon cancer.

27:59 – According to Urban Dictionary, the “vinegar stroke” is the point of no return for a man during a sex act. Let’s also take a moment here to acknowledge the gross stereotyping at play in having the daughter of the Haitian envoy happen to be into voodoo.

31:00 – More info about Novistadors from Resident Evil 4 can be found here, along with an image (they aren’t always invisible).

37:48 – John calls back to Beale playing with a spiderweb last issue. Ironically, the fly in this web turns out to be key to defeating it.

39:13 – The image of something born from an open wound calls forward to the climax of this story – Zed using John’s feelings for her to conceive and give birth to the goddess.

40:35 – Offscreen Moment of Awesome is another TVTropes term. It means exactly what it sounds like.

46:44 – That was my impression of the hapless Hypello merchant from an infamous early mission in Final Fantasy X-2. Despite the fact that “siege” isn’t really your best word if you’re a Hypello, the merchant insists on using it incorrectly every time the caravan comes under attack.

47:07 – Sean’s quoting the Nick Cave & The Bad Seeds post-punk hit “Red Right Hand,” which comes from their 1994 album Let Love In. The song has made a lot of appearances on film and TV soundtracks including an episode of The X-Files when it was still very new, and Peaky Blinders, for which it serves as the opening title theme.

48:55 – “What’s Going On” is a 1971 soul song by Marvin Gaye from his album of the same name. The complete lyric is “Father, father, we don’t need to escalate, you see war is not the answer, for only love can conquer hate.”

52:12 – Bizarro Sephiroth is the freaky-looking penultimate form of the final boss of Final Fantasy VII, though this comparison is actually kind of an understatement, as the terror-thing is much more freaky looking.

56:27 – Constantine being pulled, amnesiac, from the water by a fishing boat reminded me of the opening of Robert Ludlum’s 1980 novel The Bourne Identity and its 2002 film adaptation.

I don’t think we mentioned it in the audio, but at least once Jallakuntilliokan is referred to as the “god of all men,” which underscores the themes of this last issue of the arc.

We forgot to talk about this episode’s most Constantine moments, but here are some contenders: