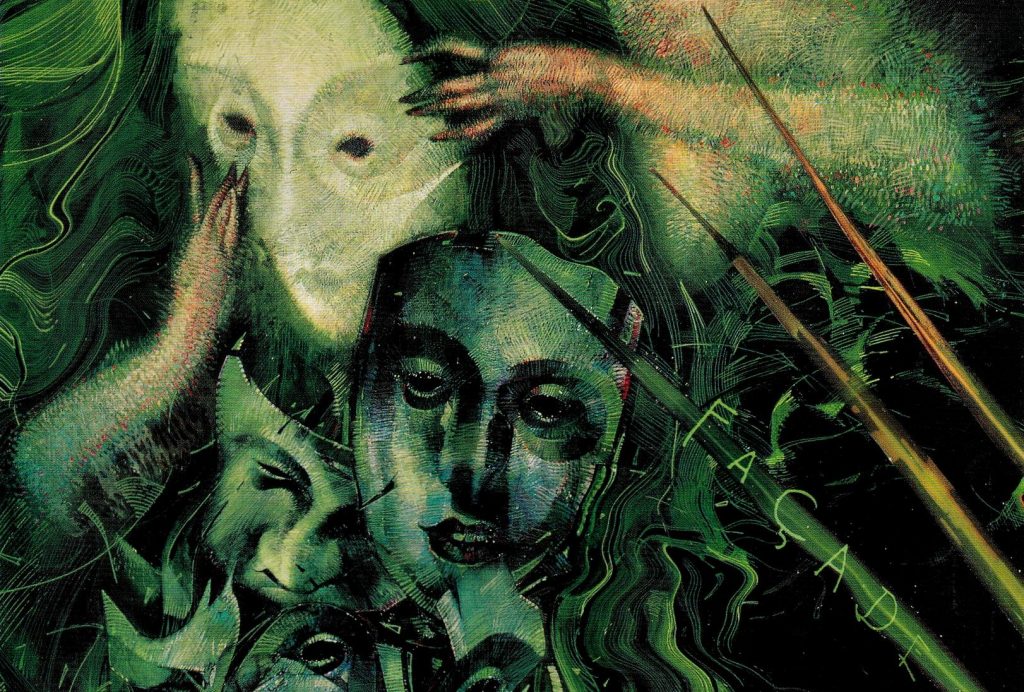 3:37 – Wendell’s Mound is a real place, and the giant is called the Long Man of Wilmington or the Wilmington Giant. Made by cutting into the earth to reveal the chalk layer underneath, the giant would have appeared as a subtle green discoloration or shadow in the grass before 1873, when a restoration project reinforced the figure’s outline with yellow bricks.

6:20 – Precisely dating Shakespeare plays is always tricky, but A Midsummer Night’s Dream is generally thought to have been written in 1595 or 1596, while a line in Romeo and Juliet refers to an earthquake – often thought to be the Dover Straits earthquake of 1580 – as eleven years earlier.

7:49 – Here, the lines to the Long Man’s left and right are interpreted as the edges of a door. In fact, a 1766 drawing of the figure depicts him holding a rake in one hand and a scythe in the other, their heads now faded from visibility.

11:42 – This is our third reference in as many issues to a certain poet of Greek myth, though for spoilers’ sake I won’t mention him by name.

22:35 – Richard Cowley was a member of Shakespeare’s company, and according to historical record lived on until 1619 – unless that was Puck.

29:39 – Specifically, Metamorpho’s right arm is orange, his left purple and scaly. His right leg is made of mud, and his left of some pale metal. By the way, Metamorpho is another Bob Haney-Ramona Fradon creation, first appearing in 1965’s Brave and the Bold (vol. 1) #57.

29:59 – Metamorpho was originally constrained, as Eric suggests, to elements present in the human body, but that limitation has since been forgotten.

41:12 – Metamorpho has died on several occasions, though it requires something pretty extreme. The first occasion – vaporized by an alien’s energy blast – doesn’t really count, since Metamorpho reformed moments later. On the second occasion, atmospheric reentry definitely did the job, though the three people he was protecting inside his body survived. The third time, he was presumed dead when he was trapped aboard an exploding satellite, but he was revealed to have survived both the explosion and, this time, the subsequent reentry.

41:37 – The song was written for the 1970 film M*A*S*H by Johnny Mandel, with lyrics by director Robert Altman’s then-14-year-old son Mike Altman. The senior Altman had demanded “the stupidest song ever written.” When he tried to write the lyrics himself, he found he could not write stupid enough, and his son wrote the lyrics in five minutes.

43:40 – When this issue is read alongside the previous one, Death – who’s somewhat willing to overstep her bounds in order to help someone – comes off much more compassionate than her brother Dream, who remains detached despite his representing much of humanity’s innermost thoughts and feelings. Dream’s dispassionate arrogance is a major theme of the series, as are the ways in which it’s challenged.

45:57 – This is the first issue with no Morpheus at all. Previously, Morpheus had appeared for only a half page in Sandman #6, the diner of death issue.