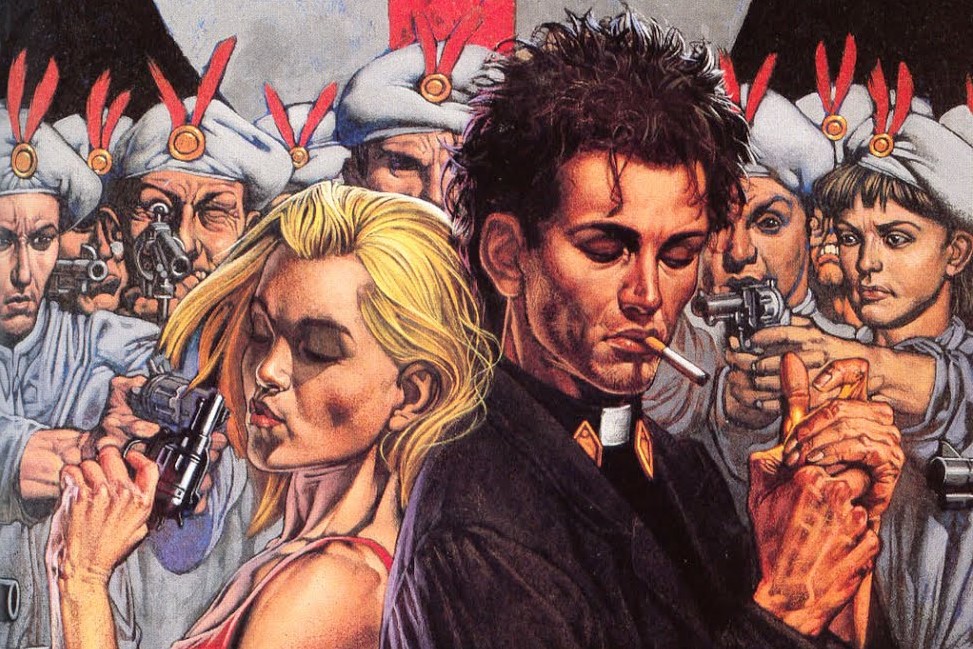 Preacher’s racing to the rescue in issues 19-21, but we still have enough time to learn about the Comprehensive Test Ban Treaty, Alanis Morissette, and how to balance a plane.

3:23 – Really, we have the information to guess at the significance of this incident. The clues are all there, if you look for them.

3:31 – The U.S. President depicted here is only seen from the back or from some distance away. He’s a white-haired gentleman, so it’s possible but not unambiguous that he’s contemporary President Bill Clinton, in keeping with my bad impersonation.

6:58 – Back in Preacher #17, Marseille said, “As you know, very few of the Grail personnel here are with us. I’ve taken the precaution of crewing your jeep with three of them, so you can talk freely…” Starr replies, “But otherwise watch my mouth.”

9:27 – This is a neat callback to a couple of moments in Preacher’s first story arc. An angel shot by the Saint of Killers says, “I’m an Adephi. I’m… one of the host… of angels… I never even thought about sinning.” And a couple issues later, DeBlanc complains that said angel was “Too clean-cut. Too good to be true.” Fiore retorts, “He was an angel of the Lord! What’d you expect him to do, deal crack?”

10:27 – We haven’t mentioned it in a while, so: “Him that quit” refers to the Almighty, who walked off the job the moment Genesis was born. The Saint was present when Jesse dragged this information out of DeBlanc in Preacher #4.

17:51 – That’s true; the US has not test-detonated nuclear weapons since CTBT was adopted.

19:42 – I don’t know who’s to blame for the tile at the Grail’s secret base in Masada. Possibly Paul.

30:55 – That was in Preacher #5. Cassidy jumped off the Empire State Building just to scare Jesse, then caught himself a few feet down and climbed back up.

32:46 – “Head Over Feet” is the fifth single from Alanis Morissette’s 1995 album, Jagged Little Pill, written by Morissette and Glen Ballard. Tulip sings, “And don’t be surprised if I love you, for all that you are,” an unknowingly ironic reflection on their relationship: Tulip loves Jesse for his goodness, while he’s plotting to leave her behind.

34:39 – This ship of corpses image hearkens back at least to Bram Stoker’s Dracula as the de facto method of long-distance travel for merciless supernatural killers without innate means.

37:08 – Not to be confused with a Real Gentleman of Leisure.

39:37 – That was a reference to the first episode of the TV series Dollhouse.

40:30 – Although the events of this story arc probably take no more than a couple of weeks, at this point readers have been in suspense as to how and whether Cassidy will escape the Grail for five months.

41:22 – The Boys was Garth Ennis’ creator-owned comic, published by Dynamite from 2006 to 2012, focusing on a super-powered black ops squad charged with keeping the world’s usually-sociopathic superheroes under control.