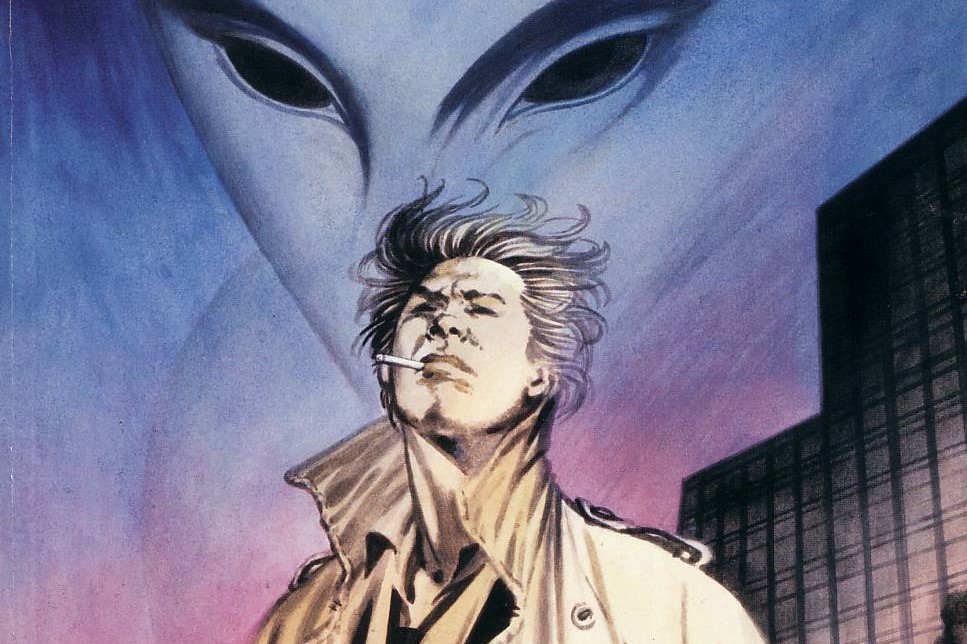 John Constantine battles the living incarnation of third world problems in 1995’s The Horrorist #1-2, and somehow manages to make it a first world problem. Be warned: this is a disturbing one.

2:32 – The Court of Owls are a villainous organization introduced as Batman foes by Scott Snyder and Greg Capullo in 2011’s Batman (vol. 2) #3. Although they’re a secret society as old as Gotham City of evil rich folks who wear creepy owl masks, they’ve managed to avoid any clashes with John Constantine, possibly because he only visits Gotham when he’s fall-down drunk. Or maybe he’s just procrastinating.

3:36 – We’d like to thank Jay and Miles X-Plain the X-Men for putting a name to that device.

7:30 – Clearly, the strange interloper can be none other than TV chef Emeril Lagasse, a few short years from developing the bit that would make him famous.

10:15 – Eric is essentially correct, although a Pink Gin is properly made with a sweet or Plymouth gin, rather than a dry or London gin, hence the alternative moniker, Pink Plymouth.

14:58 – Not quite. The term “Damascene” is actually a reference to the road to Damascus. It means “relating to a sudden moment of insight.”

16:56 – “Famine chic” is a term people really use, but it usually refers to the fashion of clothes designed for very thin women and the models that show them off.

17:59 – As I will not be allowing him to live down anytime soon, Hellblazer #7 demonstrated that not only could John not use a computer, he couldn’t even manage a vending machine. He actually did have an opportunity to learn some basics in issue #12.

31:07 – Forgive me if this part sounds like I’m repeating victim-blaming excuses. Even in the context of a mystical embodiment of the suffering of victims, that’s not something I’m eager to do.

38:29 – Doctor Destiny intercepted a car in a similar manner in Sandman #5.

48:50 – Jamie Delano certainly knew as he wrote this line that he had previously written a nine-issue Hellblazer epic entitled, “The Fear Machine.” I had originally written “The Fear Engine,” no doubt influenced by this comic.