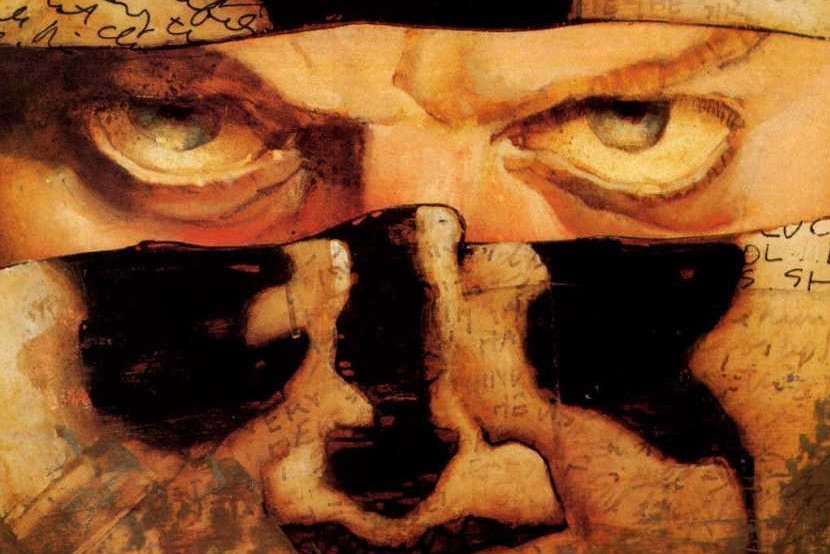 After saving the world from the dragons of masculinity, Constantine visits an old friend in Hellblazer #23-24 to rest, recuperate, and maybe pawn his blood. Join us as Jamie Delano takes aim at suburbia and Constantine takes on the intellectual property cops.

2:42 – Mucous Membrane is Constantine’s fictional former band. The “Venus of the Hardsell” video can be found here.

3:08 – Legends of Tomorrow, now in its third season, is a part of the Arrowverse. It’s not based on any particular DC comic, but contains a number of characters from the DCU, mostly refugees from various team books like The Atom and Hawkman. Matt Ryan has appeared as Constantine in two episodes, as well as one episode of Arrow.

4:50 – Treasure Island is an adventure novel by Robert Louis Stevenson, published in 1883 (after being serialized earlier). Like the Pirates of the Caribbean films, it’s a compilation of numerous pirate story cliches, the difference being that it actually originated most of them.

6:01 – I’m referencing that time John Constantine got a note shoved in his mouth by the titular Broken Man in Hellblazer #19, covered here.

6:28 – Sean’s talking about “VARGR,” the first story arc from the Dynamite series James Bond. Written by Warren Ellis, this was the first James Bond comic book in decades and was totally phenomenal. It’s highly recommended.

7:08 – In Lewis Carroll’s novel Alice’s Adventures in Wonderland, the contents of “Drink Me” bottle allowed the user to become very small. This was also a major allusion in Jefferson Airplane’s 1967 hit “White Rabbit.”

7:16 – The Ozymandias statue is an allusion to the Percy Shelley poem “Ozymandias,” which contains the famous line “Look on my works, ye Mighty, and despair!” It’s appearance here may also have been inspired by the then-recent DC comics miniseries Watchmen.

7:59 – The Picture of Dorian Gray is an 1890 novel by Oscar Wilde. It concerns a beautiful Victorian man who retains eternal youth, while a painting of him ages in his place.

8:19 – Patrick Rothfuss, author of the fantasy series The Kingkiller Chronicle, is known for his distinctive appearance including wild flowing hair and beard.

9:21 – William Burke and William Hare were a pair of serial killers active in Scotland in 1828. They are most famous for the unusual motive of their murders: to sell their victims as cadavers.

10:00 – Sherlock Holmes habit of taking cocaine in a “standard pharmaceutical solution” is established in his second full-length novel The Sign of Four, from 1890. It was made more prominent in Nicholas Meyer’s modern Holmes novel The Seven-Per-Cent Solution, published in 1974 and adapted by its author into a film in 1976.

11:11 – The Pequod is the doomed whaling ship commanded by Captain Ahab from Moby-Dick.

14:58 – Fu Manchu is both an archetypical mad scientist supervillain and a controversial racial stereotype. He first appeared in the novels of Sax Rohmer, starting with The Mystery of Dr. Fu-Manchu in 1913.

15:31 – Sean’s right. The ticking clock in Peter Pan always signified the presence of the crocodile who was eternally in pursuit of Captain Hook, not Hook being in pursuit of Peter.

16:18 – I was thinking of the 1954 Broadway musical Peter Pan, which as Sean said, starred Mary Martin as Peter. I referred to it as the “NBC musical version” because it appeared numerous times on that network between 1955 and 1991, and again with a new cast in 2014.

29:29- The Kubrick Stare is a sort of stock evil look, described in this TVTropes article.

30:28 – Constantine’s awkward exclamation of “It’s not very safe!” may be intended by Delano as a Freudian slip, given that he just cracked Jerry’s and stole all the money. There seems to be little other reason to say this about a bottle of brandy, which does not spoil.

30:50 – The Maltese Falcon is an artifact of great value, and a quintessential example of a MacGuffin, from Dashiell Hammett’s 1930 novel of the same name, famously adapted into a 1941 film starring Humphrey Bogart.

32:55 – Many of the names in Jerry’s ledger refer to mysterious or clandestine people or organizations. In order: Lord Lucan was a British Earl who vanished in 1974 while under suspicion for the murder of his children’s nanny. Sinn Féin is an Irish republican political party with connections to the Irish Republican Army. John DeLorean was an American auto industry executive known for the spectacular failure of his company and a subsequent attempt by the FBI to entrap him into a drug deal in 1982.  The Mossad is the Israeli intelligence agency. The Comte de Saint Germain was a mysterious figure of the 18th-century European aristocracy who claimed to be immortal. Finally, Papa Midnite is a vodoun practitioner and underworld figure who first appeared in Hellblazer #1.

33:30 – Yeah, we just spent a long time arguing about The Kingkiller Chronicle.

38:45 – “Cool Guys Don’t Look at Explosions” is a song by The Lonely Island. The joke is pretty self-explanatory.

45:21 – The Last of Us is one of my favorite video games of all time. It’s a survival horror game in which two characters form a father-daughter-like bond while navigating a sort of post-zombie apocalypse landscape.

47:17 – Solomon Grundy is a zombie-like supervillain who is mainly an adversary of Batman, but his backstory of revivification in a swamp links him to Swamp Thing as well.

48:28 – Matthew Cable has come up a bunch of times on our show. We first encountered him as supporting character in our coverage of Swamp Thing #76-77 (here), while he was in a coma. He later died and became Morpheus’s raven in the Sandman series. I wasn’t able to find any information on his… er… rebirth in current DC comics, so maybe it was never realized.

52:00 – “Going Down Easy!” by Tom King and Francesco Francavilla appeared in the DC Holiday Special 2017. I don’t want to spoil it any more than we already have, but it’s really worth a look.