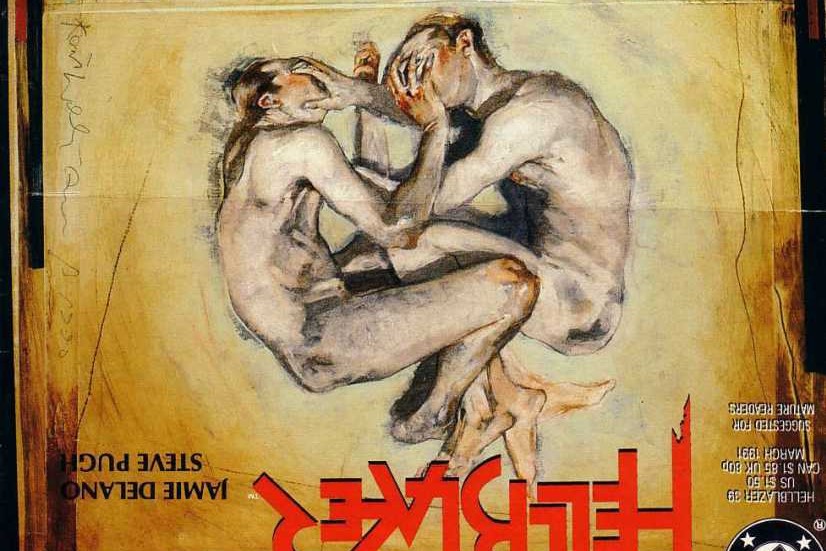 7:53 – Worth noting, though, that we don’t know whether John’s vision of his death was just his subconscious, or if it was a true prophecy.

8:15 – Sean is probably making reference to The Princess Bride.

11:13 – Remember that On the Beach is also the name of a 1957 novel by Nevil Shute and its 1959 film adaptation, both about a group of people in Australia who survived a nuclear war waiting for the fallout to inevitably blow down and kill them all.

11:20 – In our discussion of the first part of this arc, we touched on the ambiguity whether there was anything mystical eating at John, or just regular depression and loneliness. That ambiguity returns here, with John blaming his growing unease and self-loathing on an unseen antagonist.

11:33 – Apparently the title even predates King Lear and was the name of a very old fairy tale.

17:00 – Original Sin was a Marvel crossover storyline from 2014, written, as I mentioned, by Jason Aaron.

24:35 – Sean’s trying to quote Friends here, but what Phoebe actually says is “It should be called It’s a Sucky Life and Just When You Think It Can’t Suck Anymore It Does.”

39:28 – Sister Anne is probably Anne-Marie of the Newcastle crew. In “our” world, she became a nun after the trauma she suffered in Newcastle, and was eventually killed by the Invunche in the pages of Swamp Thing.

46:39 – This was the “Roots of Coincidence” storyline in Hellblazer #247-249, written by Andy Diggle. Peter Milligan’s run began immediately after that story ended.

47:24 – Zed makes a cameo in Hellblazer #200, along with other Constantine exes. Marj and Mercury finally resurfaced in 2016’s The Hellblazer: Rebirth series. Errol has not appeared since this issue.

54:08 – If you want to establish an “original sin” at the very founding of the X-Men, well, Joss Whedon really did that much better with his creation of Danger, the sentient computer Professor X enslaved to create the Danger Room.

54:30 – Professor Xavier did indeed choke the shit out of Cassandra Nova in the womb in July’s X-Men Red #6 by Tom Taylor.

58:22 – Sean didn’t mean to sound flip. It’s just, somebody dies in the first three pages of every Vertigo comic we read on this segment.

1:00:23 – The Black Spot was the piratical mark of death. I’ve never been to a club that marked you for death the moment you entered, but you’d never know it from how often I go to clubs.

1:04:23 – “Where’s my skateboard?” – or more abstractly, “He doesn’t know where his skateboard is” – is a long-running joke between us. Not applicable here!

1:04:52 – In Tenjho Tenge, delinquents Nagi and Bob have fought their way to the top of several schools. On their first day at Toudou Academy, they get their asses handed to them by the kendo club, and reasonably assume them to be the toughest club. They are then informed that the kendo club is the weakest club, and they have a long ladder to climb. Shortly after that, Nagi accidentally sees the female lead naked and is told they are married, because this is anime.