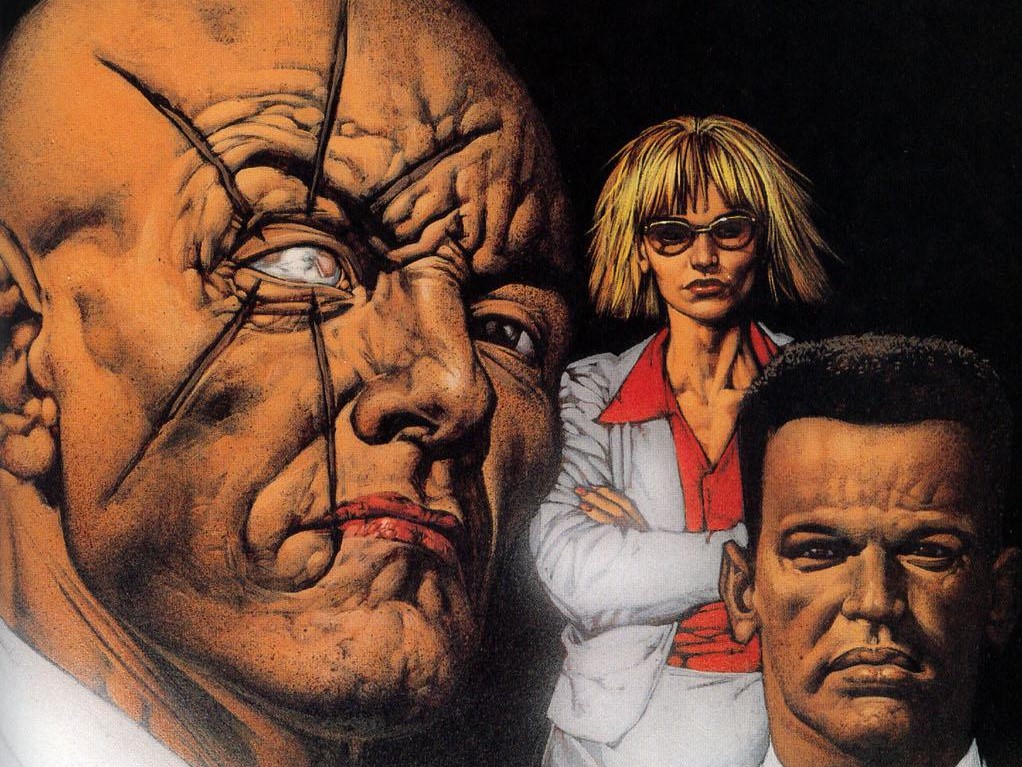 Jesse Custer makes it to San Francisco to visit Cassidy in Preacher #13-16, but runs afoul of a mess of new villains! Some are utterly menacing, and one is really, really uncomfortable.

4:35 – This is a reference to a Pizza Hut ad we saw many years ago while visiting the UK.

6:26 – Ah! Apparently “pale horse” is sometimes used as a slang term for cocaine. More to the point of this issue, “riding the white horse” can translate to using heroin. So the title may refer to the shipment of drugs everyone is chasing.

12:12 – Pouissin’s word, boche, is itself a derogatory slang term for Germans, the French equivalent of Hoover’s “kraut.” It’s derived from the French for an inanimate “head” (like a head of cabbage or the head of a nail), literally meaning something like “blockhead.”

12:41 – This being his first appearance, Herr Starr could also be the titular “pale rider.” Indeed, the original pale rider is Death, one of the four Horsemen of the Apocalypse, and Starr’s duties for the Grail include dealing in death and ushering in Armageddon.

15:07 – “Them” meaning Cassidy, Tulip, and Jesse. Not Cassidy and the guy with piercings on his face.

15:44 – Arseface is a recurring Preacher character, though at this point we haven’t seen him since the very first story arc, and the main characters only met him for a moment there. Still, it’s a reminder of their earlier adventures.

42:13 – The story of Starr’s hoarse intonation is told in Preacher Special: One Man’s War.

53:57 – Apparently Greta was supposed to deliver the drugs for Gallico, but pocketed them instead.

55:33 – Starr’s accusation here is uncomfortably homophobic in its own right, but at least it’s placed in the mouth of a bad guy.

1:03:18 – Okay, my Cassidy impression went Scottish for a minute there, and I apologize. We know from earlier in the comic that Cassidy doesn’t like the Scots, or at least doesn’t mind when rock musicians badmouth them.

1:04:30 – Junky is a 1953 semi-autobiographical novel by beat generation writer William Burroughs, who was known for profligate drug use, covert homosexual affairs, and an incident where he purportedly shot his wife dead while trying to shoot a highball glass off her head. Cassidy’s assertion that he’s represented in the novel represents yet another suggestion that he has a history of drug use.

1:05:18 – Dr. Worm is a song from They Might Be Giants’ 1998 album Severe Tire Damage. If my information is correct, the song – about a worm learning to play the drums – is loosely based on the life of a drum machine that band founders John Flansburgh and John Linnell toured with early in their career. They called the drum machine Dr. Worm, and considered it a full member of the band.

1:05:29 – Indeed, my brother PK and I briefly discussed Dr. Worm in an episode of Blankcast.

1:07:13 – Cassidy said he was the “Same age as the century, mate,” when he and Jesse visited the Empire State Building in Preacher #5.

1:10:28 – Presumably, he would see one at most. Because they travel single file, to hide their numbers.

1:12:43 – Judgment Night is a 1993 thriller film about four friends on the run after accidentally witnessing a murder committed by a gang leader, who is played memorably by Denis Leary.