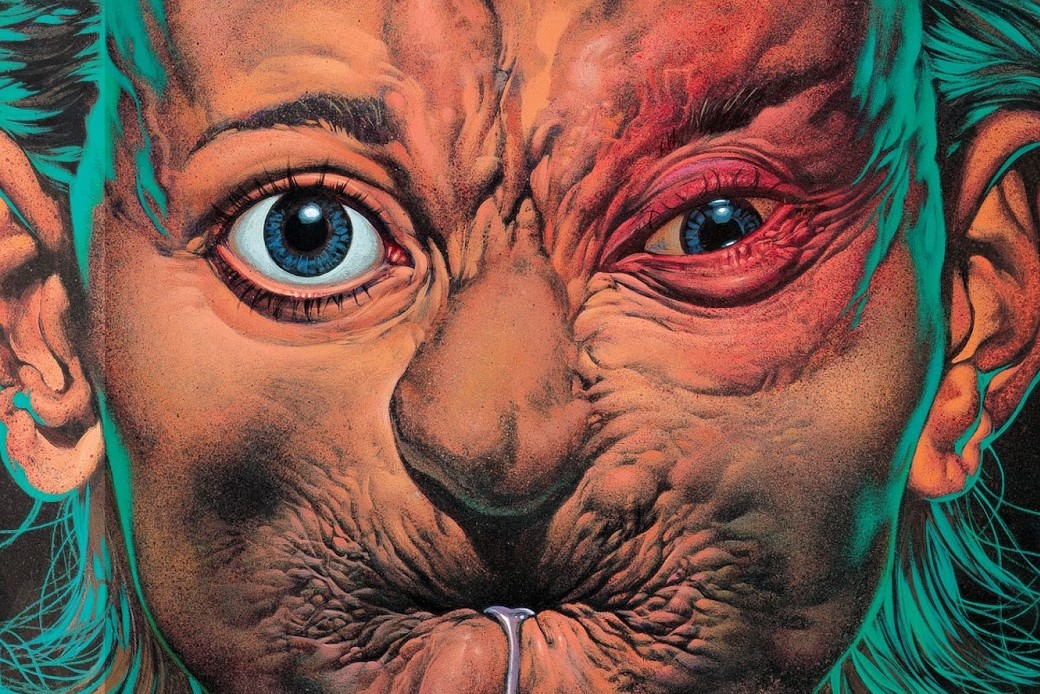 Get ready for a tale of grunge, guitars, and, oh yeah, soul-crushing depression as Sean and special guest Andy delve into the history of Arseface in Preacher Special: The Story of You-Know-Who.

5:16 – Ennis has described the Saint of Killers as inspired by Clint Eastwood’s character in Unforgiven, albeit with (by Steve Dillon’s choice) a face modeled on Lee Marvin.

7:44 – In Preacher #4 (find our coverage here), Jesse ordered Sheriff Root to go fuck himself, apparently not realizing how literally the sheriff would take it. Upon waking in an ambulance to the realization he had severed his own penis, Hugo Root shot himself in front of his son.

8:37 – The Story of You Know Who hit newsstands in December 1996, running alongside the Masada story arc in Preacher. At this point in the main series, Arseface hadn’t made more than momentary reappearances, and it would still be months before he fully rejoined the cast in Preacher #29, “Old Familiar Faces” – which also depicts him telling a random stranger the story of his life and his quest for vengeance.

17:22 – This establishes right away Pube’s awareness of Root’s personal problems, and that although he provides a refuge for Root, he doesn’t much care about those problems.

18:20 – Hugo Root had something of a redeeming moment in Preacher #40, “Arsefaced World,” but it was very clear this was only a dream or hallucination born of Arseface’s wishful thinking.

34:27 – My best guess has this chapter named for the Moody Blues song from their 1972 album Seventh Sojourn.

38:45 – Cassidy’s telling of his humble origins can be found here.

39:06 – As another parallel, Cassidy is turning out to be a rather toxic friend to Jesse. This theme of masculine friendships, often with a dark side, seems to be a favorite for Ennis, and ties into his ongoing concern with masculinity and its positive and negative aspects.

40:41 – Not to discount stealing a gun and shooting a dog, which was definitely a low point.

43:52 – We’ve talked before on this podcast about Ennis’ potshots at grunge music. This issue very nearly approaches a more substantive critique, contrasting Nirvana as the voice of troubled youth against teens with real, severe problems. The music is supposedly representative of their plight, but gives them no useful answers, no real support – emphasized by Pube describing Kurt Cobain, a rock star he never met, as the only one who ever cared.

44:45 – By neglecting to recap the events of Sheriff Root’s death, the comic avoids calling out that Arseface’s best friend and father both shot themselves in front of him – that his father’s suicide in Preacher #4, which drives Arseface in his quest for vengeance, is a repeat of this traumatic scene.

48:23 – Consistent with the treatment of Herr Starr in the main series, we see here that while Garth Ennis has a lot to say about the virtues and pitfalls of traditional masculinity, he’s also not above taking cheap shots at the masculinity of less pleasant characters.

49:48 – The gun Arseface refers to here is his father’s .44, the one Hugo carried on duty, kept in a safe, and the used to shoot himself. I’m sure there’s an argument to be made about the contrasting symbolism between the shotgun – which Root wielded in misguided attempts at masculinity and in his failed suicide attempt – and the .44 his father successfully took his own life with. It should be noted, though, that his father’s gun doesn’t bring Arseface virtue or happiness either. He’s happier after he abandons the path of vengeance.

54:23 – To finish the thought: Jesse shows how a person can rise above horrific circumstances. If Arseface didn’t turn out so well, it might be because he wasn’t strengthened by his damage the way Jesse was, or because of the lack of that countervailing positive influence. Or alternately: Arseface’s optimism and good heart show he has risen above his past, just in a comically guileless kind of way.