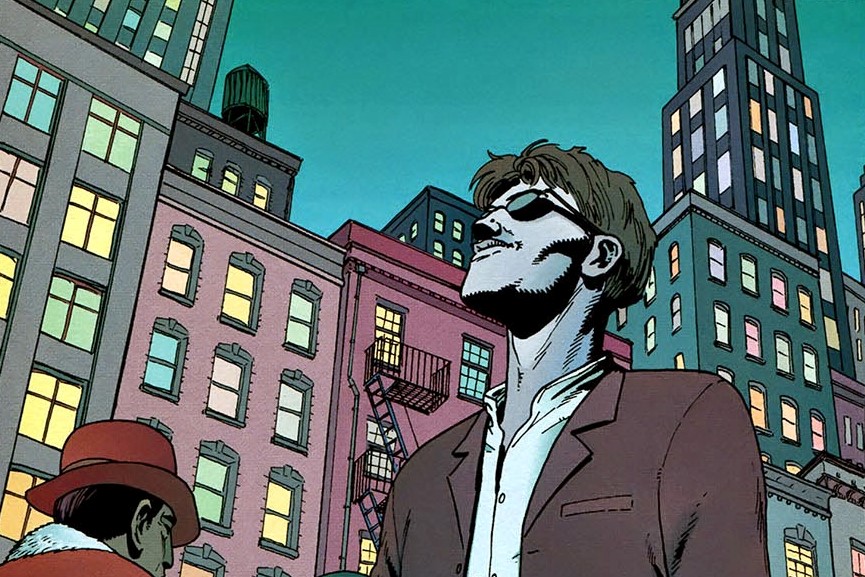 Cassidy reveals how he spent his century in Preacher #25-26. Join us for two issues packed with Irish history, drinking stories, and Eric’s favorite music reference.

1:22 – Clarification! Not our Grandma! Eric’s referring to Jesse’s Gran’ma, Marie L’Angelle, a nasty piece of work we met in the All in the Family story arc.

3:12 – The English sniper in this scene wields a Lee-Enfield rifle, clearly recognizable from the younger Cassidy’s more recent run-in with one. The weapon of the Irish Volunteers is visibly distinct, lacking the Enfield’s ten-round magazine – Cassidy will later make mention of it as a Mauser rifle.

6:35 – Born 1890, Michael Collins was a major military and political leader of the Irish revolutions. A member of the Irish Republican Brotherhood, he took part in organizing the Easter Rising (seen here). Collins survived the Rising and the subsequent executions, and became a senior member of the Sinn Fein party. When elected to the British Parliament, Collins and other Sinn Fein representatives refused to sit in London, instead establishing an Irish parliament in Dublin, the Dail Eireann. On the day the Dail first sat, an Irish Republican Army attack on British constables effectively kicked off the Irish War of Independence, throughout which Collins served as Minister for Finance of the Irish Republic, President of the IRB, and Director of Intelligence for the IRA. Collins helped negotiate the Anglo-Irish Treaty that ended the war, and fought for the treaty in the subsequent Irish Civil War – he was killed in an ambush in 1922.

6:57 – Billy is an obvious foil for Jesse here: his disinterest in the Irish cause and his willingness to kill to protect his brother reflect Jesse’s position at the end of the last issue, that God “can shove his law up his ass, if just one word of it says I can’t stand by my friend.” Again, when a higher purpose conflicts with brotherhood, brotherhood comes out on top.

7:42 – It’s also worth noting that Proinsias is angry, as opposed to “big pissed with the lads.”

12:15 – The note Jesse wrote for Tulip before ditching her in France can be seen in Preacher #21.

13:49 – Cassidy is presumably referring to the 1985 original Fright Night, in which American actor Chris Sarandon starred as the vampire villain Jerry Dandrige.

21:16 – In the previous issue, one of the Irish Volunteer officers argued that there were no Germans closer than “fucking Flanders.” Here, we learn that McCann fought the Germans in Flanders. During the Easter Rising, the 12th Battalion of the Royal Inniskilling Fusiliers was deployed against the Irish rebels, but McCann was fighting on the continent at the time.

22:12 – Here we have a subtle suggestion that Cassidy isn’t friendly to female intrusion upon male friendships, which mirrors Tulip’s feeling (in the New York and San Francisco arcs) that she’s unwelcome joining Jesse and Cassidy in their hellraising nights out.

26:51 – Historians believe that Eoin MacNeill’s countermanding order did greatly reduce the number of Volunteers who joined in the fighting. Cassidy (or Ennis) doesn’t mention here what happened to Patrick Pearse – he ordered the Volunteers to surrender on April 29, 2016, and was executed by firing squad on May 3.

38:00 – The Wake ran as a limited series in 2013-14, wrapping up – understandably, since it seems to have wiped out human civilization in the first installment – in just 10 issues.

42:34 – What with the destruction of major coastal cities by tidal wave, it looks to me like they’re building up to a sort of “Dagon” style undersea civilization reveal – which is probably the most legitimately frightening possible extrapolation on the Creature from the Black Lagoon.

44:50 – The fight between two Harley Quinns – and an explanation of why that happened – can be found in this month’s Batman: White Knight #2.

46:12 – I’ve been enjoying what I’ve seen of James Tynion IV’s Detective Comics run, which casts the Bat-Family in a team book with the ever-awesome Kate Kane Batwoman as leader.