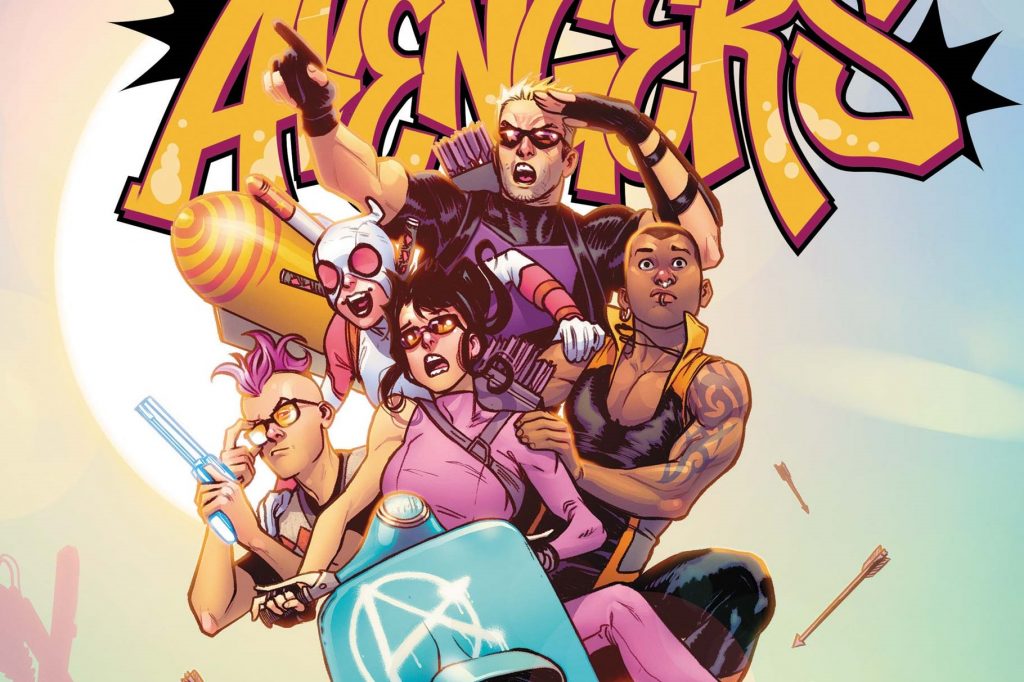 1:51 – Dumb joke. Nolan North is the guy from Uncharted (and many other video games). Nolan Woodward is a Marvel colorist.

9:36 – The news crawl is a reference to Fraction and Aja’s Hawkeye (vol. 4) #2, which featured the following Daily Bugle cover: 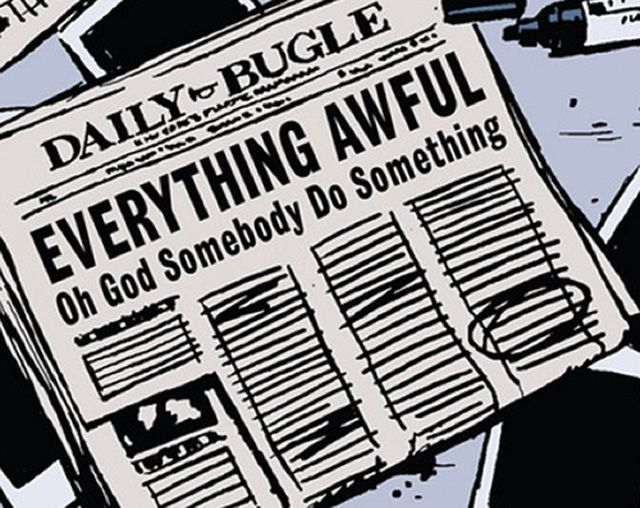 10:43 – America Chavez previously appeared in Secret Wars and in Kieron Gillen and Jamie McKelvie’s Young Avengers. She’s one of the first lesbian superheroes to get her own book and was raised by two moms, themselves super-powered.

17:50 – Sean points out that we can’t be sure who asks “You are going to pay, right?” but I think it has to be America, based on context. America and Fuse are the only ones in the scene who don’t have another line in the same panel, and Fuse is Kate’s boyfriend.

19:20 – Basically, the Pride was a gang of supervillains who controlled L.A. with an iron fist – in addition to being the Runaways’ origin story, they also served as a retroactive explanation why there was very little superhero or villain activity on the West Coast. Also, Sean would like to apologize for bringing up Ben Reilly.

20:11 – Gwenpool’s listed first full appearance is Howard the Duck (vol. 6) #1, written by Chip Zdarsky and penciled by Joe Quinones. The Christopher Hastings/Heather Antos/Jordan D. White credit is for Unbelievable Gwenpool #1, which listed Hastings as writer, Antos and White as editors, and featured art by Gurihiru and Danilo Beyruth.

26:20 – Patsy Walker became Hellcat in Avengers #144. Prior to that, she spent years as a mainstay of Marvel’s soap-opera comics.

27:00 – I couldn’t find anything that explicitly identifies Quire as British or American, but a quick re-read of Riot at Xavier’s reveals that he’s obsessed with the front page of the Daily Bugle from the day that he was born. This may give a slight edge to the idea that he’s from the United States, perhaps even the New York area.

28:06 – Despite Quire’s claim, X-Men with no powers whatsoever (at least temporarily) include Storm, who was actually leader of the X-Men for years after having her powers removed by a government agent, and Madelyne Pryor, who eventually developed telepathy but joined with no powers other than a commercial pilot’s license.

28:33 – MODOK first appeared as an enemy of Captain America in 1967’s Tales of Suspense #93, whipped up by the dream team of Stan Lee and Jack Kirby. 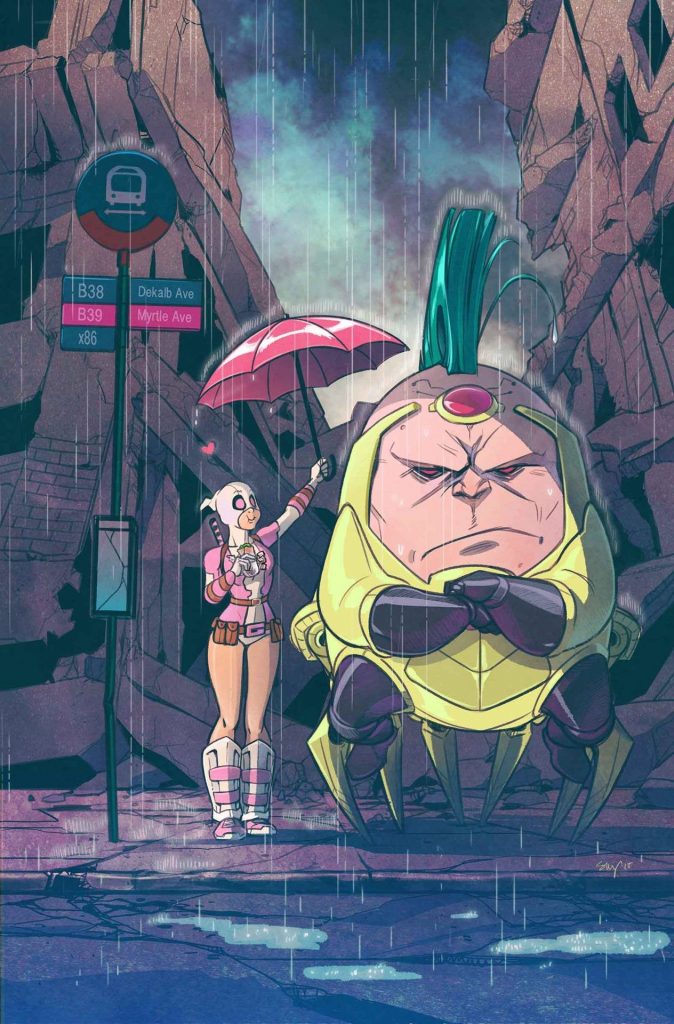 32:50 – Tigra hasn’t always worn this costume – in fact, it’s relatively modest for her. Previous versions have often consisted of a purple bikini, often with a little cat head emblem dangling in the center.

37:07 – MODOK has been tied to A.I.M. since his origin, having once been an A.I.M. employee before his transformation by evil science.

37:30 – I couldn’t find any support for my idea that A.I.M. stopped being evil for a while because it was owned by Peter Parker. Sean’s right, it was Bobby da Costa who bought them out and turned them to good.

41:20 – Anya brought up the world without shrimp and the world with nothing but shrimp as examples of alternate dimensions in Buffy season 4’s “Superstar,” when the gang had been transported into the world where their nebbishy high school classmate Jonathan was the world’s greatest hero. Among other callbacks, Illyria claimed to have visited the shrimp world and “tired of it quickly” in Angel season 5.

1:03:29 – Satana first appeared in Vampire Tales #2, created by Roy Thomas and John Romita Sr. She doesn’t seem to have any history with the West Coast Avengers prior to this – she’s the sister of Daimon Hellstrom, who was a member of the Defenders, and was herself a long-time member of the Thunderbolts.

1:03:44 – Madame Masque has been an enemy of both Hawkeyes ever since they foiled her plan in Fraction’s “The Tape” storyline. Prior to that she was mainly an Iron Man villain. She also appeared in the Marvel Cinematic Universe as a villain on Agent Carter. 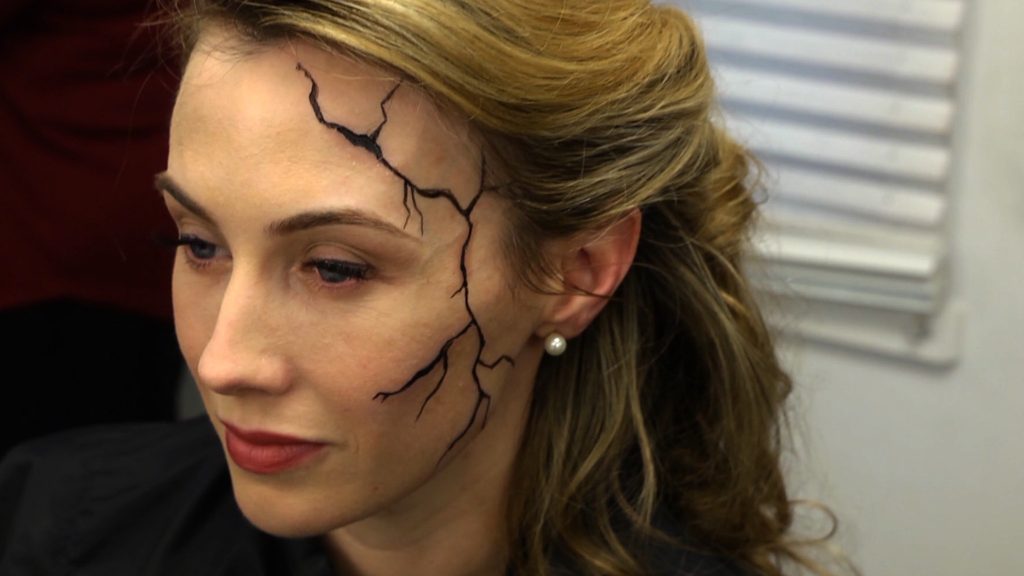 1:11:22 – Sean adds: My difficulty doing the Punisher’s voice without slipping into self-parody should tell you something about my feelings on the character.

1:13:31 – I’m making a cheeky reference here to Cassidy’s feelings about the Empire State Building from Preacher.