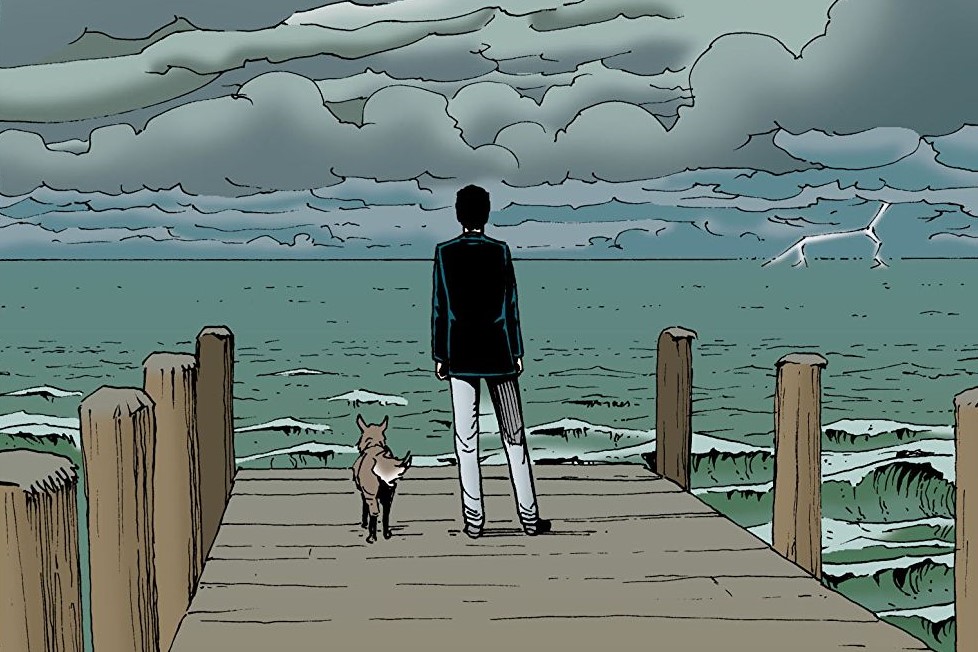 One fine day, a stranger came to the town of Salvation – a stranger named Jesse Custer. But Jesse will find a familiar face waiting for him in Salvation, and this time we don’t mean Arseface!

3:58 – That’s a reference to Link from The Legend of Zelda game series, who is known to be the bane of flimsy wooden structures and all grasses.

8:07 – Billy-Bob was killed by T.C. for “spying” – while Billy-Bob was sleeping in Gran’ma’s barn, T.C. entered the barn with the intention of having intercourse with a chicken.

13:30 – Jesse’s referring to the moment he fell out of the plane. Cassidy caught his arm, but was leaning out of the plane to do so, catching fire in the sun. (Cassidy is a vampire.) Jesse used the Word of God to order Cass to let go – shocked by Cassidy’s betrayal, Jesse’s reciting yet another time he saved Cassidy’s life.

18:22 – Eric’s making a reference to a recurring gag on Arrested Development.

18:54 – I was thinking of, “This does make some obstruction in the blood, this cross-gartering,” which is a line from my favorite Shakespeare play, Twelfth Night. The amorous servant Malvolio is tricked into adopting this archaic, overly formal mode of wearing his stockings with the promise of his mistress’ affections by the pranksters Sir Toby and Sir Andrew. Crossed garters cross once behind the knee and meet again above it; Quincannon’s braces stay safely below the knee.

21:01 – Droopy cartoons often featured a recurring gag where Droopy’s opponent would flee to the ends of the earth by means of a comical succession of different modes of travel. Inevitably, Droopy would be waiting for him at the destination.

25:22 – Jesse is probably borrowing a line from Gilbert & Sullivan’s The Mikado, although the phrase originated earlier.

27:39 – Although shooting was certainly on Jody’s list of essential skills for a manly Southern man, Jesse seems to shy away from using any weapon more powerful than his fists – whether a gun or the Word of God. Perhaps it’s out of fairness, or perhaps he doesn’t want to kill his enemies unless they’ve really earned it. (He’s also given the reason that he doesn’t want to over-rely on anything that can be taken away from him.) Over the rest of the series, it’ll be interesting to keep an eye on when and where Jesse chooses to use lethal force.

31:35 – Jesse sees “Christina’s World” in the Museum of Modern Art in issue #28. We discussed the painting (and included an image) here.

35:08 – It may be worth noting that Christina’s deceased husband, John Custer, was also a Vietnam veteran. Tales of his wartime service emphasize that while war brought out the best in him, it was through standing up for what was right and his fellow soldiers, even when doing so ran against the rules and expectations placed on a soldier. Ennis paints the skill and resolve of soldiers in a positive light, the war itself not so much.

35:55 – Christina’s experience strikes a parallel with Jesse’s: earlier in the story, we saw him unable or unwilling to remember what happened after he fell out of the plane.

38:51 – Jesse was a wanted fugitive – for a very short time at the start of the series. After Jesse and the gang gave him an inadvertent hand in catching a serial killer, Det. Tool filed a false report saying Jesse’s body had been pulled out of the river. This all happened in the Naked City arc in issues #5-7.

46:50 – Eric’s referring here to Archie Horror’s ongoing Jughead: The Hunger, which sounds like a White Wolf game line, but isn’t.

47:48 – In retrospect, maybe Joe’s upset because he knows he’ll soon be forced to move out of this house.

48:30 – I admit, I’ve since read a little bit more on what Joe the Barbarian is about, and it seems so obvious to me now. To a certain subset of readers, the significance of these details – the candy, “hypo” – is probably much more obvious, even familiar. As well, the long establishing shots of Joe’s huge house serve a clever dramatic purpose, with the benefit of hindsight. In my defense, I must’ve just expected much weirder from Grant Morrison.

49:14 – “Beware the Gray Ghost” is a beloved episode of Batman: The Animated Series, in which Batman teams up to defeat a crime wave with the actor who starred in the black-and-white superhero serial he loved as a child – played by 60s Batman star Adam West.

49:45 – We discussed Grant Morrison’s extra-dimensional-cops-and-also-pornography epic The Filth in this episode.

50:08 – For example, Richard Corben’s Heavy Metal character Den is the musclebound alter-ego of, variously, a milquetoast office worker or a teenage nerd.

51:29 – We covered the classic Sandman story here and here.