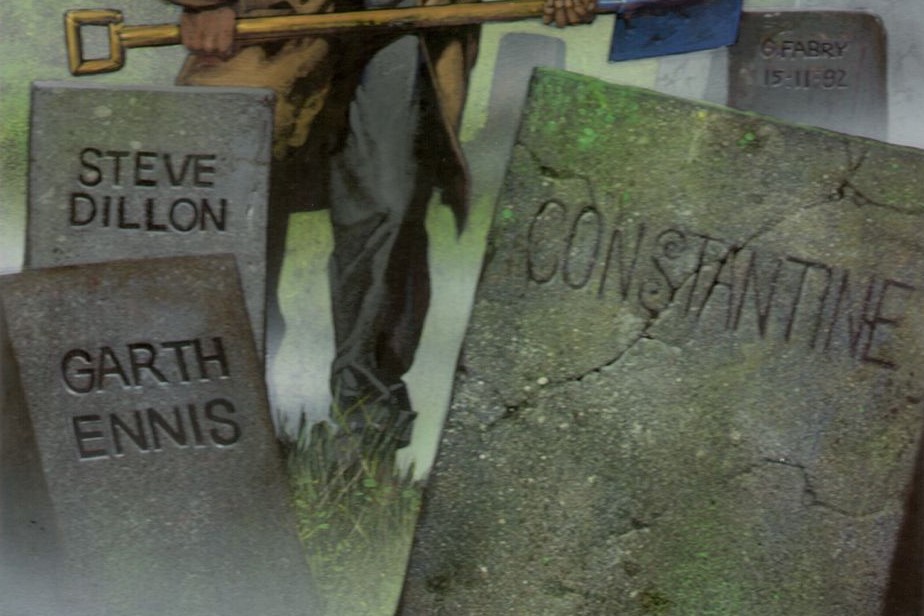 Constantine’s throwing a birthday bash, and you’re invited – along with a bunch of other weirdos, a cut-rate wannabe warlock, and a legendary creative team.

3:00 – While it’s true that Steve Dillon drew a couple issues earlier in the run, Sean’s saying that this feels like a moment where he announces himself as an artist and takes possession of the character.

8:52 – The Man was actually a member of the Damnation Army, which was run by John’s then-primary nemesis Nergal and was opposed to the Resurrection Crusade.

12:41 – We ran it through Google Translate and a lot of these Latin words don’t translate at all. Based on Latin roots, it sounds vaguely like “Crows of Hell, eat this wizard’s eyes.”

12:50 – We couldn’t find an example of all three parts of the phrase together, but “thrice damned” is directly from Paradise Lost. The phrase might also stir memory of the thrice-bound, thrice-locked chest from The Kingkiller Chronicle. The phrase that appears in Blackwood is “I comprehend thee. I bind thee. I curse thee.” 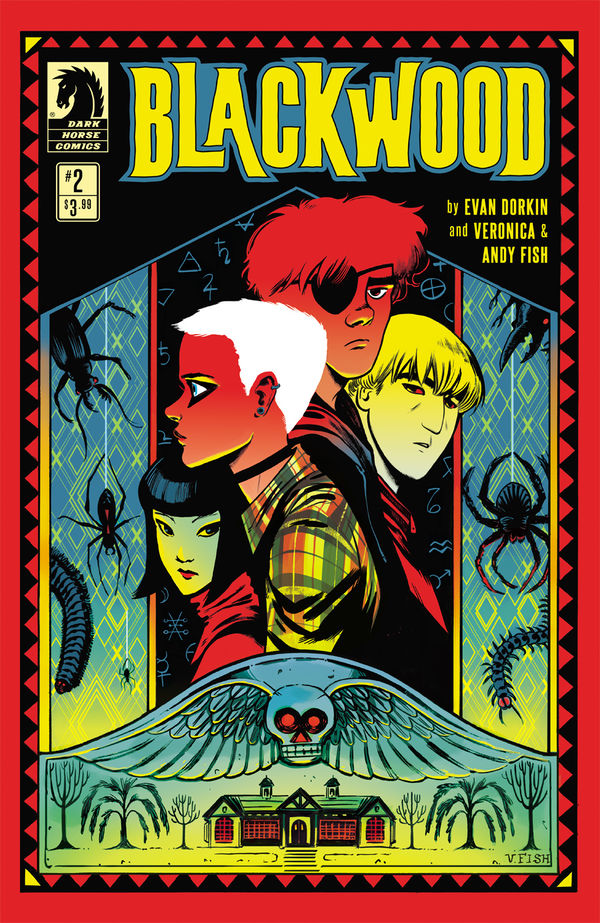 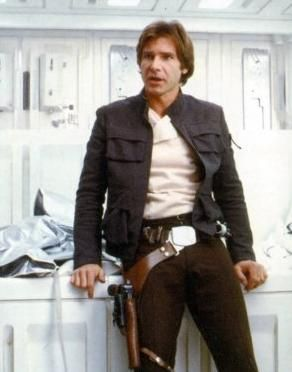 13:57 – That’s a reference to Harry Potter. Particularly in the films, students at Hogwarts School of Witchcraft and Wizardry often wore scarves striped with their house colors. Kit’s scarf must have reminded Sean of Ravenclaw’s colors in the films: blue and silver. They’re blue and bronze in the books.

14:06 – Gemma implies that Emma was the only Constantine ex she met. Actually, Zed helped save her in “Waiting for the Man,” when John and Zed’s first date was interrupted by the news of Gemma’s disappearance, but Gemma was unconscious by the time Zed showed up and didn’t wake up until Zed had already retreated to her hotel room.

15:12 – Kit is inviting subtle comparisons here with previous Constantine girlfriends: Judith was enthralled by John’s magical power, more in love with the legend of Constantine in his own head than the man. Zed saw John as her last chance for a normal life, as a weapon or a shield she could use to be free of the Resurrection Crusade.

20:05 – Path of Exile is a video game, a sort of spiritual successor to Diablo II. Sean is referring to Dialla and her ribbons.

20:43 – Harry Constantine has an excellent sense of time, to know that it’s been 20 years despite spending it all buried alive with no contact from the outside world, or clocks.

25:01 – We do see Gemma one more time in before we say goodbye to Garth Ennis, in #77. After that, she disappears for 100 issues before turning up in Mike Carey’s run.

25:32 – This Hellblazer is the first issue under the Vertigo imprint. Welcome home, Hellblazer!

27:53 – In the United Kingdom, “Zimmer” or “Zimmer frame” is so popular as a term for a walker that it’s considered a genericized trademark, despite the fact that Zimmer Holdings is an American company.

29:40 – Once again, Fate makes an appearance as John’s excuse for wallowing in self-pity. 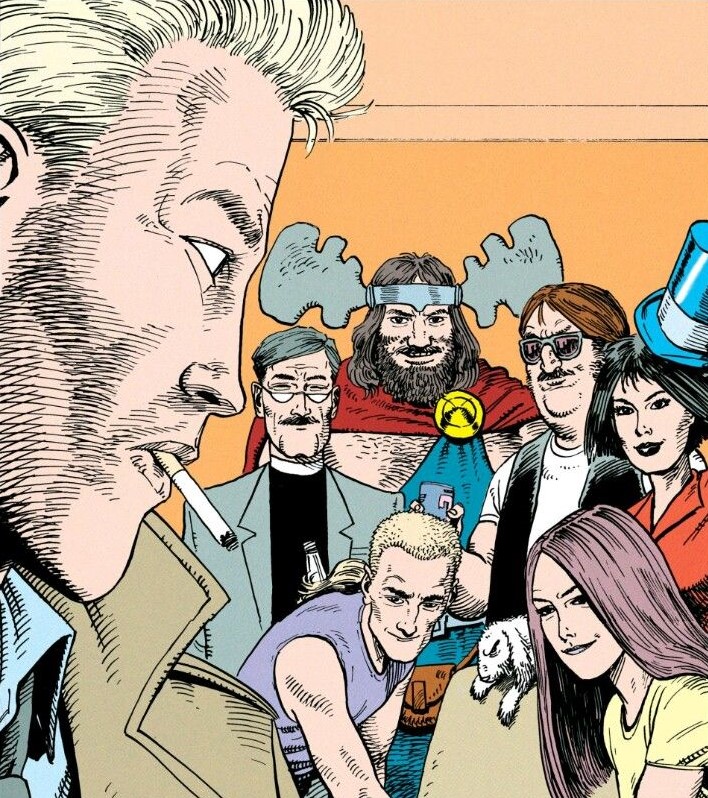 31:48 – The Lord of the Dance (back center, in the antlers) previously appeared in Hellblazer #49, where he was the title character. As mentioned, we met Nigel (front center) during the “Royal Blood” story arc. Ellie (front right) was first seen in “Dangerous Habits” and then reappeared in “Guys and Dolls.” Zatanna (back right) predates John Constantine as a character by decades, having first appeared in 1964’s Hawkman #4. As far as I can tell, she was first shown to be connected with him in Saga of the Swamp Thing #49, part of the Brujeria story arc. 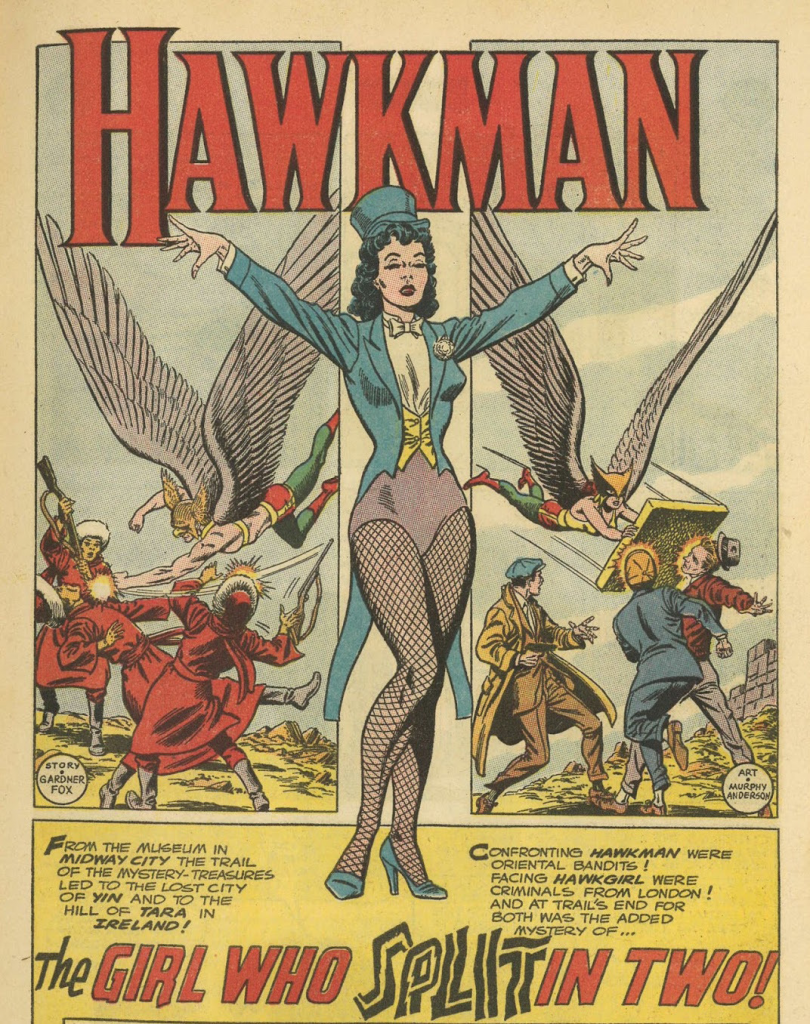 33:20 – While the demonic possession is obviously a fabrication, the marital troubles Constantine invokes here were real. 1992 saw the separations of both Prince Charles and Prince Andrew from their wives, Diana and Sarah. The real “dodgy stuff in the bedroom” was Prince Charles’ long-term affair with Camilla Parker Bowles (now his second wife), which was outed in Andrew Morton’s 1992 book Diana: Her True Story.

33:45 – We’re getting carried away over Monty Python’s “Candid Photography” sketch.

37:16 – Sean pointed out that we know DC Universe Jesus isn’t in Hell because Ellie said the First would love to get his hands on him. However, I was actually referring to Jesus’ descent into Hell in the Christian faith, which is itself a subject of disagreement. Different Christian scholars and denominations disagree on whether Christ descended into Hell at all, and if he did, whether it was the hell of the common dead or the hell of the damned. The Bible doesn’t really discuss the descent explicitly at all.

38:18 – Frankie the Eunuch was a minor villain introduced in Preacher #20.

40:00 – Treebeard is a character from The Lord of the Rings, an Ent met by Merry and Pippin in Fangorn Forest.

40:12 – Specifically, the song was “Has It Come to This?” from the first Streets album, 2002’s Original Pirate Material.

41:09 – Let’s not forget that John once killed a ghost by giving it a hug. He’s also not the only one who ever tried telling a ghost to piss off.

42:42 – It turns out that “Rake at the Gates of Hell” is from the soundtrack to the Alex Cox film Straight to Hell, which is why I wasn’t familiar with it. This isn’t the first time Garth Ennis has referenced a hard-to-find Pogues song: He used their song “Haunted,” which can only be found on the soundtrack to Cox’s film Sid and Nancy, in Preacher #10.

44:58 – Speaking of writers who don’t have the patience for connective tissue, I’ll just drop this here.

51:00 – Sean’s right: it was Sasquatch, though both he and Wendigo are associated with the Alpha Flight villain Tanaraq as well as the Hulk himself.

53:21 – At the time of this writing, the Big Ten NCAA athletic conference has 14 members.